PROJECT EVIDENCE for Prevention of Mental Disorders. The project coordinator is Dr Allan Mawdsley. The version can be amended by consent. If you wish to contribute to the project, please email admin@mhyfvic.org

[3] Indicated Programs are those for young people who will inevitably develop mental disorders unless there is preventive intervention.

Mind-altering substance use has been a social practice for millennia, including some instances of religious practice. Attitudes of approval and disapproval have fluctuated widely, and political and legal status has generally reflected community opinions of the era, which change over time.

At one time it was fashionable in high society to have opium parties and, indeed, the British Government even fought a war over the right to sell opium. Later, although it was recognized that a relatively normal lifestyle could be maintained whilst involved in chronic opioid use, it was deemed a criminal offence and severely persecuted.

Variants such as heroin and cannabis have undergone similar swings of the popularity pendulum in both directions of rejection and acceptance. Likewise, with alcohol there has been centuries of acceptance and periods of prohibition. Cigarettes, too, have been prohibited, only to have the prohibition overturned by public demand.

In addition to pleasure and “fashion” there is also an ever-increasing scientific medical component to community decision-making, albeit with significant time lags. There is clear scientific evidence of degrees of harm in all forms of substance use. Users must decide whether the “rewards” outweigh the “penalties”. Because of the political and legal entanglement, and the spill over into publicity campaigns, the public perception is often out of step with medical reality.

This is made more complex by differing degrees of harm accruing to differing degrees of substance use whilst public perception is ill-equipped to differentiate this varying risk. It is particularly critical that medical research accurately measures effects and objectively reports findings independently of political popularity of the findings. The question of how best to manage various forms of substance use can then be considered more rationally than by political popularity.

A maladaptive pattern of substance use, leading to clinically significant impairment or distress, as manifested by three (or more of the following, occurring at any time in the same 12-month period:

(1) tolerance, as defined by either of the following:

(2) withdrawal, as manifested by either of the following:

(5) a great deal of time is spent in activities necessary to obtain the substance (e.g., visiting multiple doctors or driving long distances), use the substance (e. g., chain-smoking), or recover from its effects

(6) important social, occupational, or recreational activities are given up or reduced because of substance use

The criteria for Substance Abuse do not include tolerance, withdrawal or a pattern of compulsive use but only the harmful consequences of substance use. 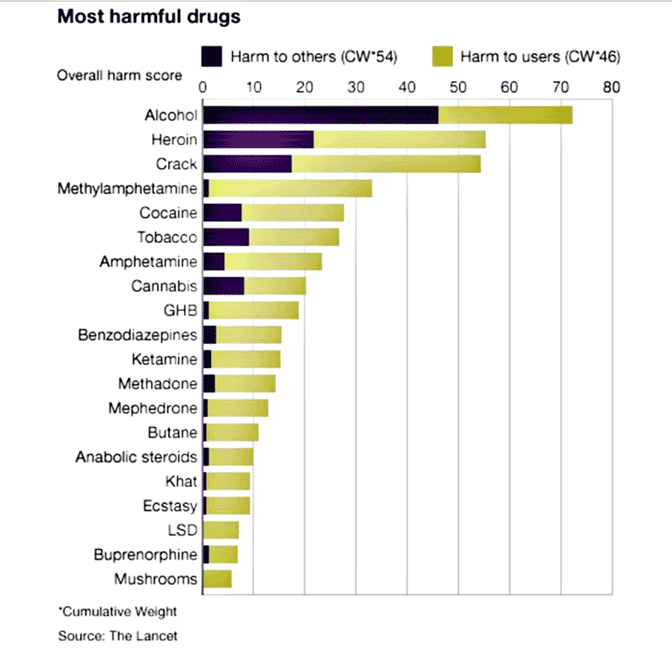 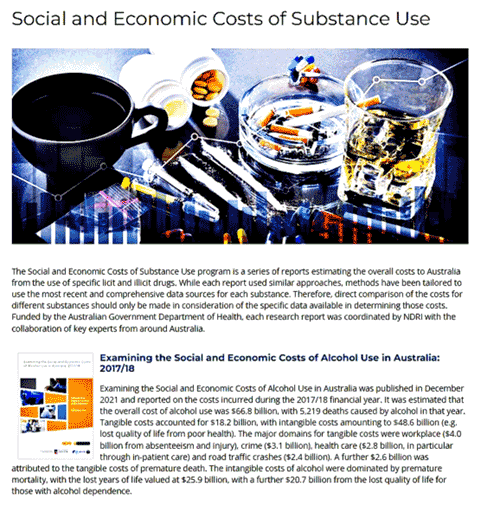 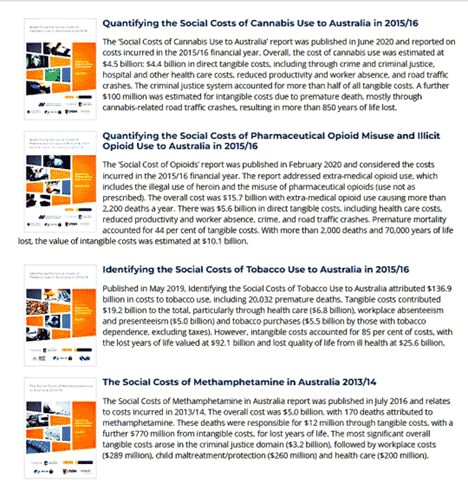 A consensus study [2] by experts using accepted rating scales for the impact upon users and impact on others found:

Most harmful to others: alcohol, crystal methamphetamine, tobacco.

Harm, of course, includes medical illnesses and the cost of treating these, together with the costs of the judicial system, and the lost productivity in the economy, especially with fatalities. However, these direct costs are dwarfed by indirect costs of family breakdown, child abuse, drink-driving, crime, etc. Economic analysis is very difficult, not only because the indirect costs are so hard to measure but also because of divergent numbers of people and degrees of usage encompassed.

For example, the intensely harmful impact of fentanyls on the small number of addicted people has to be compared to the huge number of people using alcohol, of whom only a proportion are experiencing harmful effects (but who collectively cost the community at least $15 billion per annum). Regrettably, political debate focuses more on the accuracy of the figures than on seeking the best solution to an unarguably major problem.

Difficult though cost assessment may be, the assessment of “benefit” is even worse. The alleviation of distress, the improved personal functioning, the reduction in support services required and the reduction in fraud and other crime associated with maintaining substance abuse are all debatable.

Thus, the offering of a cost-benefit analysis on two debatable foundations will inevitably be contentious. Nevertheless, the Drug & Alcohol Research Centre of the University of New South Wales has done just that for policies relating to the use of cannabis.[3]

They estimate that the present criminalisation of cannabis has a net social benefit of $294m over the costs, whereas a system of regulated legal sale would have a net social benefit of $234m, added to which would be net taxation income bringing the total net benefit to $727m. Hence, on economic grounds, decriminalisation would be beneficial, as would also be the undermining of the clandestine illegal networks currently supplying the market.

The estimates basically assume an unchanged pattern of substance use. Opponents of decriminalisation may fear an upsurge in use but that would imply latent unmet demand. There is no indication that demand is not being met and is not what was observed with relaxation of alcohol restrictions. In fact, all the indications are that the huge public demand for substances is being well-serviced by criminal networks. The major determinant of substance use is public attitude.

The main way to change public attitude is through educational approaches such as used in changing perception of smoking. The reduced use of tobacco is already being seen in reduced lung cancer and respiratory diseases notwithstanding the long prodromal period. Legal punishment comes as a poor second-class method bringing its own additional problems of stigmatisation.

Harm reduction attempts to reduce the adverse consequences of drug use among persons who continue to use drugs. It developed in response to the excesses of a “zero tolerance approach”. Harm reduction emphasizes practical rather than idealized goals. It has been expanded from illicit drugs to legal drugs and is grounded in the evolving public health and advocacy movements.

Harm reduction has proved to be effective and it has gained increasing official acceptance; for example, it is now the basis of Canada’s Drug Strategy. The principal feature of harm reduction is the acceptance of the fact that some drug users cannot be expected to cease their drug use at the present time. Harm reduction is neutral about the long-term goals of intervention while according a high priority to short-term realizable goals.

The evidence base has been reviewed by Neil Hunt, whose conclusion is:

Despite the fact that the bulk of its development has occurred in just 20 years or so, there is an extensive and rapidly developing literature on interventions that can be situated within a harm reduction perspective. This evidence base reveals that there are interventions that:

Drugs for use by individuals should be provided by pharmacies (under medical supervision authorization) at regulated market pricing based upon 10% less than estimated illicit street pricing. This ensures that the quality and efficacy of the drugs will be assured and thereby safer than unregulated street drugs. Testing of drugs found in use in the community would continue as needed.

Although use of drugs would not be an offence, the user would be held liable for resultant harm to others, with drug effects not being a mitigation.

It would remain an offence for individuals other than the authorized pharmacies to provide or sell drugs to other persons. The pricing incentive, together with the decriminalization, should encourage participation in the medically supervised programs in preference to illicit sources. Police investigation and criminal prosecution of illicit suppliers would continue unchanged. Ongoing research is necessary on utilization patterns.

Illicit drugs seized by authorities would be provided to authorized pharmaceutical companies for processing to the form sold in pharmacies, the profit made on the after-processing sale being used for the provision of substance use treatment programs. It is predicted that illicit drug sale and profitability would be greatly reduced.

It is unclear what effect this might have on illicit street pricing and adjustments to pharmacy pricing. It may also result in unforeseen changes of methodology by criminal networks. Continuing police surveillance will still be required despite reduction in individual user prosecutions.

Implications of the proposal:

Drug use is very widespread in the community, notwithstanding the harsh criminal disincentives. This indicates that a large percentage of the population wishes to have the choice of managing the risks of harm, just as they do with alcohol and tobacco. The proposal still requires supervision, not open access.

Prohibition has not worked for alcohol and tobacco and it is not working for other illicit drugs. Management by a controlled availability harm reduction strategy is likely to reduce mortality, morbidity and social damage whilst at the same time reducing criminal networks.

Considerable effort will be required to deal with the decades of conservative rhetoric about the horrors of drug abuse and misinformation that current approaches are correct. However, public health education about the harmful effects of tobacco and alcohol has resulted in greatly diminished use and it is highly likely that the same result could be achieved with other drug abuse.

It is noteworthy that advocacy by ‘Unharm’ for this decriminalization process is already occurring for cannabis and it is timely to advocate for the same concept to be generalized to all drugs.

Evidence-based treatment modalities are employed by Turning Point Drug and Alcohol Centre. These include alcohol and other drug counselling, medical treatment, dual diagnosis (substance use and mental health) assessment, and detoxification either out-patient or residential (short live-in) depending on the diagnosis.

[5] Hunt, Neil. “A review of the evidence-base for harm reduction approaches to drug use”

POLICIES for Prevention of Mental Disorders

MHYFVic recommends that cost/benefit analyses should be undertaken of all substance abuse legislation to ascertain the practicability of decriminalising and substituting harm minimisation alternative management.

MHYFVic recommends that evidence-based treatment programs should be available in all health department areas.

Evidence-based treatment modalities are employed by Turning Point Drug and Alcohol Centre. These include alcohol and other drug counselling, medical treatment, dual diagnosis (substance use and mental health) assessment, and detoxification either out-patient or residential (short live-in) depending on the diagnosis.

We welcome discussion about any of the topics in our Roadmap epecially any wish to develop the information or policies.

Please send your comments by email to admin@mhyfvic.org

View All Guide to Best Practice

Speak about issues that concern you such as gaps in services, things that shouldn’t have happened, or things that ought to happen but haven’t; to make a better quality of service…….
Help achieve better access to services & better co-ordination between services together we can…….

Please fill in the details below and agree to the conditions to apply for MHYFVic membership.