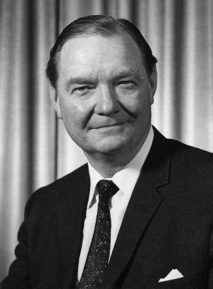 From 1948 to 2007, Dr Winston Rickards held appointments at the Royal Children’s Hospital in Melbourne – the teaching paediatric hospital of The University of Melbourne. A Child Development Research Clinic had been formed within the Children’s Hospital in 1923, and in 1928 this became the Psychiatric Clinic, which went on to provide services. In 1955, Winston was appointed the foundation Director of a newly formed Department of Psychiatry. Dr Rickards held this position until 1983. Under his leadership, this Department grew to embrace the disciplines of psychiatry, psychology, psychiatric social work, child psychotherapy, audiology, speech pathology, educational therapy, and child psychiatric nursing. As well, he developed close liaisons with the Education Department and other relevant disciplines in the Hospital. In the early 1980s, the Department was re-titled the Department of Psychiatry and Behavioural Science.

A gifted clinician himself, Winston generated a rich, multidisciplinary centre of excellence, serving infants, children, young people and their families. This excellence – world best practice- was hailed world-wide. He brought national and international innovators here, to stimulate critical reflection and action. Colleagues from the International Association of Child and Adolescent Psychiatry and Allied Professions, and other outstanding experts, visited regularly for inspiring exchange.

As Director of mental health services within The Royal Children’s Hospital, Winston was directly responsible for teaching and training in developmental psychiatry, associated with both The University of Melbourne and the Royal Australian and New Zealand College of Psychiatrists. He was also committed, over decades, to training in allied professions – speech pathology, audiology, child psychotherapy, social work, psychology and nursing. Further, he directed, supervised and facilitated the research work of the Department, linking this to both the Hospital itself and the Hospital’s Research Foundation. He subjected to special scrutiny his own clinical work with young ones suffering eating disorders.

Upon leaving the position of Director of the Department of Psychiatry and Behavioural Science, Winston became an Honorary Consultant Psychiatrist in this Hospital, stepped up his private practice, and became a Consultant Psychiatrist at the Melbourne Clinic -1985 to 1991. From 1985 to 2006, he embarked on a new phase of his professional life, by expanding his already intensive involvement in community mental health organisations.

He was determined that young people and parents should themselves be heard!!! Outstanding here were his roles as Vice President of the Mental Health Foundation (Victoria), and in establishing the Australian Infant, Child, Adolescent and Family Mental Health Association, of which he became Patron, and Mental Health for the Young and their Families: Victorian Group, of which he was Founding President.

Throughout his career, Winston was dedicated to the formation and ongoing support of many other professional and community organisations – local, state, national and international – within psychiatry, allied professions, and children’s services generally. His many awards testify to his own generosity – his love of the field and his love of the individual child.

An integrative, creative and passionate thinker, Winston challenged so many of us working with the young and their families – “to seek, to find, and not to yield”. Giving of his heart and mind with great energy, he inspired others to do likewise.Winston was enormously hard-working and left a rare legacy – complete sets of working papers relating to his wide range of professional activities. These have been sorted by topic and date into readily accessible archives. Those relating to the development and administration of child, adolescent and family mental health at the Royal Children’s Hospital are available in the official RCH Archives.

The even larger body of papers relating to Winston’s RANZCP work, especially in training and standards, and in the founding and consolidation of the specialisation of Child and Adolescent Psychiatry in Australia, is housed by the Library of the Mindful Centre for Training and Research in Developmental Mental Health (The University of Melbourne and Monash University); the contents of the Catalogue of these RANZCP Archives can be viewed by going to Library at Mindful’s website –www.mindful.org.au. Both sets of archives include the clinical papers published by Winston during his lifetime.

The advocacy championed by Winston throughout his career continues to develop strongly with the ongoing evolution of Mental Health for the Young and their Families: Victorian Group
(MHYFVic).

Since 2010, Winston’s contribution has been acknowledged by the Annual Winston S Rickards Memorial Oration, each oration addressing a vital current issue in child, youth and family mental health and wellbeing, and each delivered by a worker or workers eminent in the field. The text of each Oration is accessible on this MHYFVic website.

Suzanne Dean PhD FAPS
On behalf of the MHYFVic Committee